History is Present at the Loveland Museum 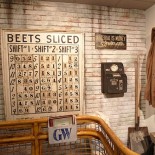 The Loveland plant was built in 1901 and operated until 1985. It was the fourth of its kind built in Colorado, the first built under the Great Western name, and the first built in the northern part of the state. 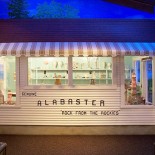 Located on Highway 34, this little shop was a must-see for visitors travelling through Loveland on their way to Estes Park. The Proctor’s created a variety of items out of Colorado alabaster including vases, clocks, candle holders and the very popular light houses. 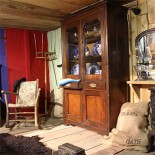 One of Loveland’s first residents, mountain man Mariano Medina settled along the Big Thompson River in 1858. He erected a cabin, store, saloon and livery stable along with a bridge crossing the river in anticipation of increased traffic between the mining camps in the south and the Overland Trail in the north. 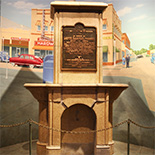 This fountain was drilled in 1885 on what is now the southwest corner of Fourth Street and Cleveland Avenue in a quest for water to supply the City. The
well produced only a small flow of untasty water. However, it has the distinction of being the deepest well ever drilled in Colorado. 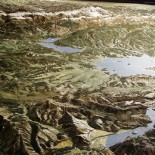 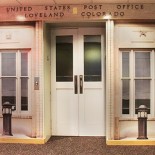 Newly remodeled with exciting features that include a kid-friendly play area where children can test their skills as mail carriers; an interactive kiosk that allows visitors to look back at the history of Loveland’s annual cachet and print their favorites; a photo cut-out where you can “see yourself” as Miss Loveland Valentine; and information on the history of Loveland’s Valentine Re-mailing program.

Take a stroll back in time to Loveland’s early days. 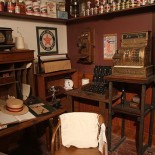 Years ago, Loveland residents relied on small, general stores along Main Street (now Fourth Street) for their grocery needs. In such stores, one could purchase sacks of flour and sugar, barrels of crackers and pickles, cigars, candy, canned goods, kitchen utensils, clothing, seeds and yard goods. These stores were the hub of commerce and conversation and became a daily stop for many residents. 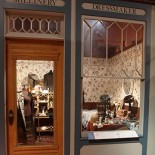 Hannah Tuggy owned the millinery shop on Fourth Street during the late 1800s. In this shop, the ladies of Loveland could find the latest in women’s hats, hat pins and trimmings. 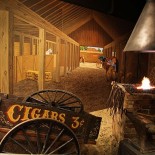 George Foote and Virgil Stoddard founded this livery which was located on the southeast corner of what is now Fourth Street and Cleveland Avenue. The livery was vital to the town residents with services that included blacksmithing, farrier services, carriage repair, feed supplies, and horse sales. The livery remained in operation until the advent of the automobile. 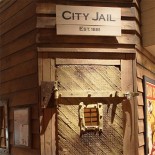 Built in 1881, Loveland’s first jail was located behind City Hall at 236 East Fifth Street. It was described “as uncomfortable as a pair of tight fitting shoes, and calculated to breed discomfort, sour temper, and vermin; one could scarcely be happy in it no matter how long they remained.” 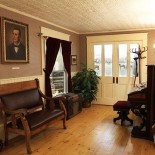 Soon after the construction in 1877 of the Colorado Central Railway line linking Denver with Cheyenne, the Loveland House was erected on the northeast corner of Fourth Street and Railroad Avenue. It was operated by Harriet Hopkins and was a convenient stop for weary travelers. Many guests were traveling through Loveland on their way to Estes Park. 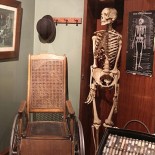 During the early 1900s, Loveland was home to several doctors including one Dr. McFadden. Many of his instruments and tools are displayed here. The doctor’s bag, considered to be a mini-office, contained everything the doctor needed when he went out on a house call.