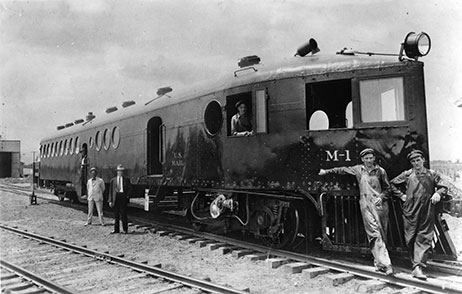 In 1873, David and Sarah Barnes moved their family to a 320-acre farm north of the Big Thompson River. Barnes learned from William Austin Hamilton Loveland, the president of the Colorado Central Railroad, that a newly constructed line of the Railroad would extend from Denver to Fort Collins and eventually to Cheyenne, Wyoming. In 1877, Barnes donated part of his farm to the Railroad for its right-of-way. The Railroad helped Loveland establish itself as a shipping point for farmers, ranchers, and lumber suppliers leading to the town’s rapid growth.

This exhibit presents a view of Loveland’s early railroad history using the Loveland Historical Society’s garden railroad as a jumping off point. A variety of related objects drawn directly from the Loveland Museum’s historic collection and photographs from Ken Jessen’s personal collection will be featured.

World Railroads
Thursday, December 5, 5:30 pm
Presented by Ken Jessen
A look at trains from all over the world.

Placing Out: Orphan Trains for Eastern Cities’ Deluge of “Street Arabs”
Thursday, January 16, 5:30 pm
Presented by Sharon Danhauer
How over 1,500 orphan train riders ended up in Colorado from 1850s-1920s.

Railroads of Northern Colorado
Thursday, March 19, 6 – 7 pm
Presented by Ken Jessen
A history of the influence of the railroads on the development of the region.