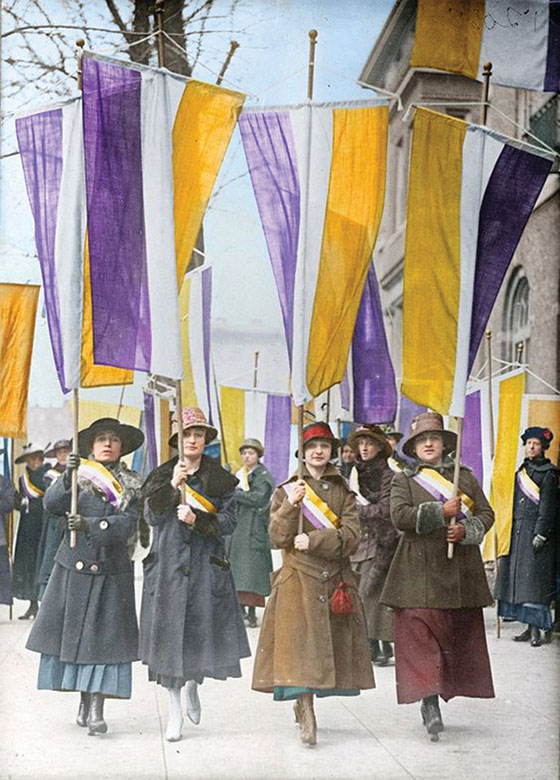 VOTE: A Centennial Celebration presents artists’ personal reflections upon the 100th Anniversary of Amendment 19, which granted women the right to vote. For this nationally juried call, artists were encouraged to submit work related to the history of women’s suffrage, the visionaries of that time, and/or the continued quest for voting equality. Loveland sculptor Jane DeDecker will be a featured artist. A maquette of DeDecker’s 19th Amendment centennial monument, Every Word We Utter, will be on display.

This exhibition is presented by 2020 Women & the VOTE, a community project that supports events celebrating women’s suffrage throughout the 2020 calendar year.

The Passage of the 19th Amendment – The Rest of the Story…
Thursday, February 20, 6 pm
Meet & Greet, Presentation, and Q&A
Presented by Dr. George E. Stevens, Professor and Dean Emeritus at Kent State University.

Americans are being forced to choose between a cherished lie and a disconcerting truth as preparations are being made to celebrate the centennial of the 19th Amendment in 2020. The lie holds that the amendment ended a century-long struggle by guaranteeing women the right to vote. The passage of the 19th Amendment, which was ratified by the United States Congress on August 18, 1920 and then certified as law on August 26, 1920, technically granted women the right to vote. However, the 19th Amendment did not initially extend to women of African American, Asian American, Hispanic American, and Native American heritage because of widespread sexism, enduring inequality, and racism from within the ranks of the women’s suffrage movement. Further, little is reported about the role of African American women’s suffrage movement efforts.

Black women, such as Ida B. Wells, Anna Julia Cooper, and Frances Ellen Watkins Harper formed their own suffrage organizations such as the Alpha Suffrage Club. These organizations not only empowered black women to fight for the vote, but also to bring attention to the wider struggles of the black community. Please come hear the next in a series of fascinating talks by Dr. Stevens and hear the rest of the story!

This program is sponsored by the Dr. Martin Luther King, Jr. Committee of Loveland and the League of Women Voters of Larimer County.

Linda Osmundson will address the challenges women faced in the fine arts from the 1400s.

Suffragists’ Fight for the 19th Amendment
Thursday, March 5, 6 – 7 pm
A dramatic retelling of the Suffragists’ fight for the 19th Amendment, focusing on the 1913-1920 years of heated activism. Presented by CSU Emerita Professor Jean Wyrick, sponsored by the Larimer County League of Women Voters  and the Northern Colorado chapter of the National Organization for Women (NOCO NOW). This presentation includes a large collection of authentic Suffrage materials,  including 1910-1920 political buttons, advertising, pro/con post cards, cookbooks, playing cards, and more.

Susan’s Dream:  If Thee Must, Thee Must
Thursday, March 12, 6:30 pm
Carrie Lee Patterson presents herself as Susan B. Anthony in a one-woman play. Suggested donation at the door.

Womens Night on the Town
Friday, March 13, 6 – 8 pm
Women that were important to women’s history, including Loveland, will be portrayed by re-enactors.

**The Foote Gallery/Auditorium is a reservable space and the gallery may be closed for private events from time to time. Please call the Museum front desk (970) 962-2410 to verify exhibit availability prior to arrival.